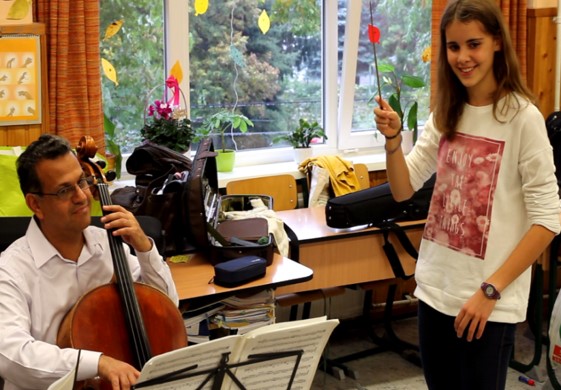 Within this element of the programme section, students have the opportunity to conduct a small “orchestra”, a string quartet. Here they can experience different forms of non-verbal communication. They learn how their body language can influence a musical process, as could be seen on the brief film clip.

The students, using exercises to enhance distinction, have to try to identify the melody from other accompanying parts. The student aims a flashlight at the member of the string quartet, currently playing the theme in a polyphone musical part.

The task, which helps the distinction, the selective musical hearing, is where two students conduct the string quartet simultaneously. Each of their four hands act as the volume control of one of the instruments. The musicians follow the volume direction of the two conductors by the way they play, which brings the presence and tone of each instrument to the attention of the audience.

Similar to the previous task is the exercise when the two students, conducting the quartet simultaneously, indicate to the four musicians with their thumb pointing up or down, whether they are playing or not. The absence of one, or even more melodies, also directs the musical attention to the instruments presence, sometimes even in a drastic mode.

The students’ task is to make the string quartet, playing a certain part of the composition, sound differently from each other. According to a short video that could be a different expression of mood from the original musical part (Theme) (Var.1), a change of the players’ seat and body position (Var. 2) a change in the string quartet’s order of seats or melody (Var. 3).

Here they can experience different forms of non-verbal communication (mimic, facial expression, movement, posturing). They learn how their body language can influence a musical process. In this exercise a student interprets a piece, or part of, by conducting it according to its musical message, utilizing the experience acquired through the previous exercises. This task is also the stage for the emergence of musical talent and musical talent search. Among the overwhelming number of student, who are not following their musical studies, there could be found individuals, who’s musical, artistic inclinations emerge through this task, as could be seen on the brief film clip.

The pupils are able to

In the “Young Conductors” program well-known compositions should be used, in which the exercises, to improve distinction, are easily perceived and interpreted. Suggested string quartet repertoire: