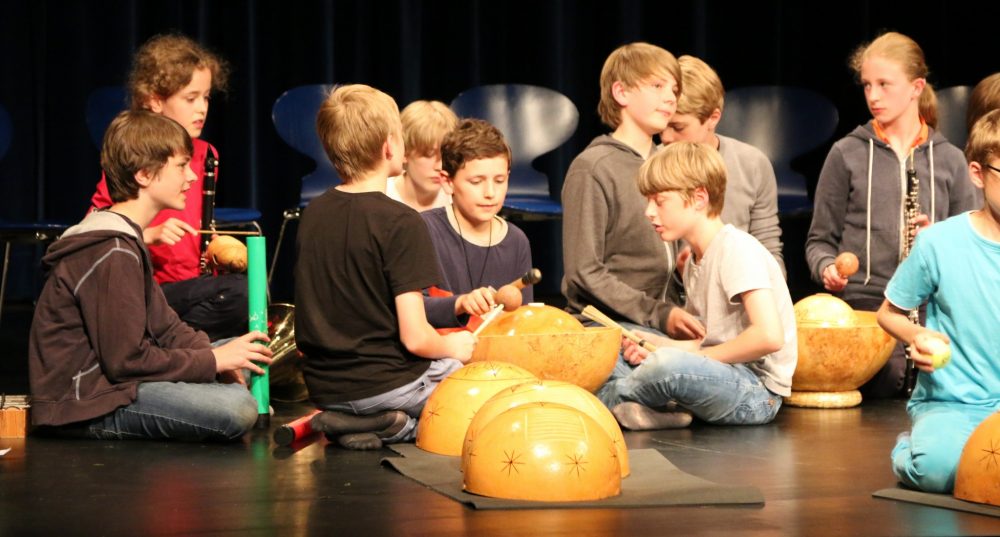 Polyrhythmic music is a characteristic music practice in most African cultures. In this module section, pupils develop a popular rhythm from West Africa. The interlocking of rhythms produces its own rhythmic melody through the different pitches of the drums, resulting in a kind of conversation between the instruments. After learning the rhythms in a simplified version for practice at school, pupils develop their own rhythmic-melodic dialogues in groups and create a performance.

A notation of the rhythm is attached for instructors. Pupils learn the KuKu by listening – imitating – recreating/ creating anew, all in line with oral-auditory traditions.

Kuku is a popular festive rhythm from West Africa. Originally, the rhythm was played, accompanied by dancing in a circle, when the women returned home from fishing.

While traditionally, low tuned djembes (West-African skin drums) are used to play this rhythm, other instruments, such as Doundounba, Sangbang and Kenkeni (West African bass drums) are also often used for the Kuku today. In the following example, the simplified rhythms are played on calabashes or, alternatively, on school skin drums (where available).

Pupils and teacher sit in a circle with a calabash in front of them.

All continue to play call and response, alternating between either teacher and pupils, or between group A and group B.

Further on, the rhythmic call signals a change in the musical play to which pupils need to react with particular attention. The call can, for example, announce a change of rhythm, a break, a change from tutti to solo, or it can end the play.

The groups present their rhythm patterns in class.

Subsequently, teacher and pupils experiment with the suggested ideas, such as: