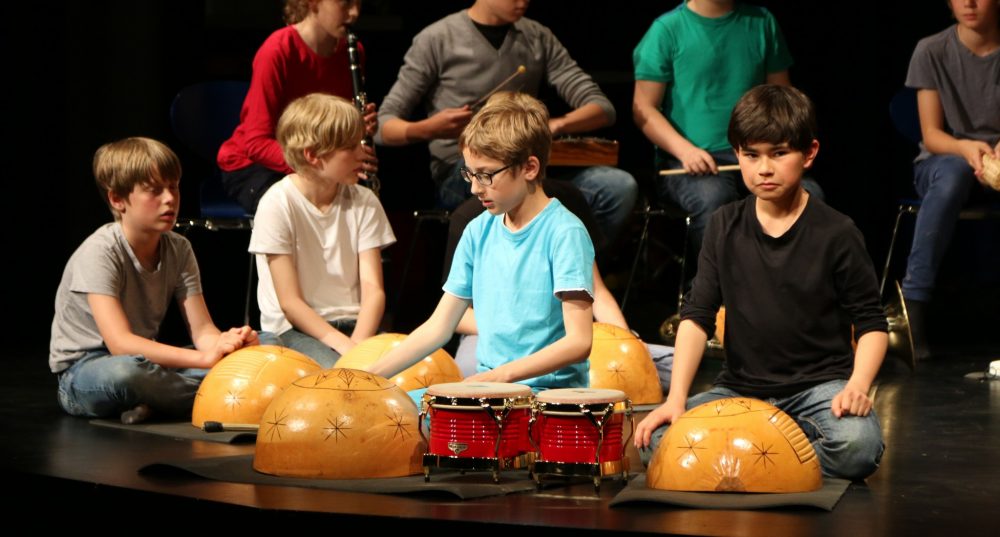 This section is divided into three parts. After a warm-up phase, pupils develop a rhythmic-polyphonic song accompaniment in part 2, using the example of the Senegalese song Fatou yo. Rehearsing the song can be very well combined with getting to know each other in new classes or groups. In the project, this was also when pupils met the Senegalese guest musician for the first time.

Part 3 is about discovering different instruments from West Africa and exploring their sound possibilities. The live performance by the musician from Senegal led to an authentic encounter with West African music practices. Video clips may be viewed as an alternative.

Participants of the project worked primarily with calabash instruments. Calabashes are common all over the African continent and are firmly established in many African music cultures. Alternatively, the following musical impulses can also be played on other percussion instruments.

Warm-up: Who is who?

Pupils stand in a circle and tap a beat together, alternating their right and left feet.

Round 5: Like in the warm – up round, pupils can now switch places. Changing the order in the circle creates new rhythmic patterns.

In small groups of four, pupils agree on a sequence of names and practice the resulting rhythmic pattern several times until all four pupils can play it confidently and synchronously. The groups then present their rhythms in class. Afterwards, two groups go together and try to play both their rhythms at the same time, thus creating a first polyrhythmic play. The teacher should support the group work by playing a percussive, stable beat.

I am Fatou, the pretty Fatou
I love my name Fatou

….is a traditional and very popular song, known across generations and in different regions of Senegal. Fatou is a very common girl’s name. In West Africa, names are not chosen individually for a child, instead there are sequences of names in a family. Many girls are called “Fatou” or “Bintou”, and boys “Cheikh” or “Abdoulaye”. Addressing people in songs by singing their names is a traditional and widespread music practice and stands for the appreciation and respect of every individual in the social community.

Moving forward, name rhythms and the rhythms of the song are the starting point for discovering the close relationship between language and rhythm.

The teacher can either sing the chorus of the song Fatou yo to pupils, or pupils may listen to it in the following YouTube video (up to at least. 1.05) and then repeat it. The text should be sung as noted.

AFRICA Music /Best of all time : TOURE KUNDA: Fatou Yo

All accompanying structures are played together in the group. The class is then divided into three groups, with each group taking an accompanying pattern.

Part 3: Sounds from West Africa and Fatou yo

Only three at a time! – Exploration in the circle

Pupils sit on chairs in a circle:

Each group transfers one of the three accompanying rhythms to an instrumental playing technique.

After a short rehearsal time, each group presents their instrumental version. Afterwards, all three instrument groups play the song.