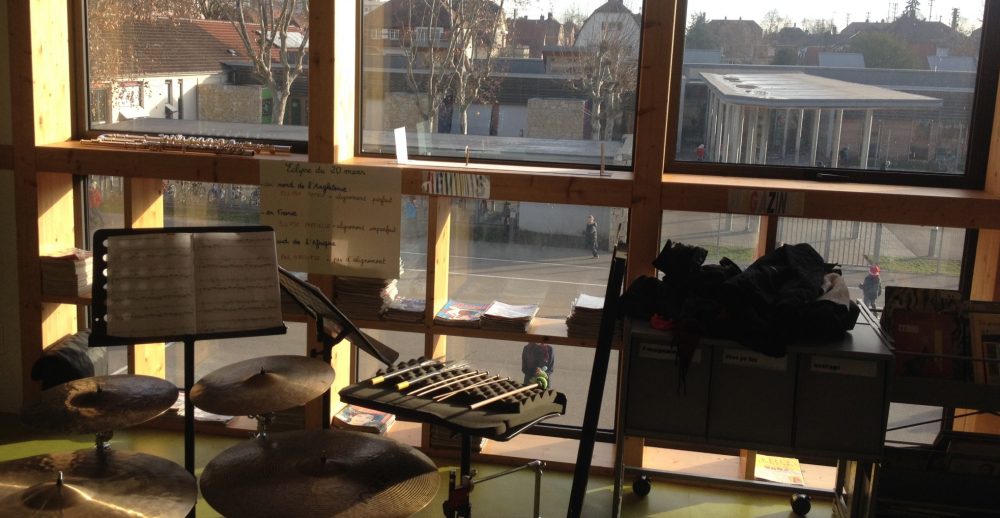 The approach of a group of professional musicians, the approach and reflections of the HANATSU miroir Ensemble.

The ensemble of professional musicians: throwing light onto, and reflecting on the routes to both music and contemporary music

This step helps to get to know the ensemble who will be welcomed to the classroom.
The HANATSU miroir Ensemble approaches a wider audience and their perpetual questioning of the accessibility of music and more specifically their contemporary music, leads them to increase access to their work during the course with students.
The reflections provided by the HANATSU miroir ensemble can be a guide for the first encounters with professional musicians for the class.

Key words creativity and entrepreneurship: flow of ideas, exploration, interaction with the environment, working in teams, sensibility for problem diversity

Step 1 A step towards a wider and closer public, following the example of the HANATSU miroir ensemble

The ensemble wishes to respond to an open and curious public, which is ready to be guided by the sensuality of a setting that will enable it to approach a musical repertoire which is sometimes considered “cerebral”. Sometimes this public lacks the keys to understanding and therefore cannot properly hear the music. The contribution of an intelligible scenography and dramaturgy makes it possible to train the public in the core processes of contemporary creation, through proximity, sensitivity and engagement.

Step 2 What is contemporary music?

HANATSU miroir Ensemble: Contemporary music is for us the music of the possible. All aesthetics, all experiences are permissible. The rule is to invent one’s own, to break free of all shackles and reinvent a musical environment, from the smallest to the largest of its components. Think of the sound as an environmental element in addition to its traditional narrative and dramatic use.

In the early twentieth century the noise became sound. This is borne out by Luigi Russolo’s futuristic manifesto, “The Art of Noise” (Arte dei rumori, 1913) in which the author notes that the human natural sound environment has changed and his ear became familiar with the sounds of the city, machinery and industries that engulfed the continent in the late nineteenth century. Sound production of an orchestra, limited by the cost of a finite number of instruments, is no longer sufficient for the constantly renewed demand for new textures sought by composers.

A new family of instruments has taken up a vacant position: the percussion family In 1929, Edgard Varèse dedicated his first play, “Ionization” to this family. The first percussion class started in Paris, In 1953 and then in 1962 the first percussion ensemble was born: the Percussions of Strasbourg.

Before this the percussionist was relegated by classical musicians to have a punctuating role (e.g. timpani, cymbals and drum) and then the percussionist’s profession became a job of colourist, then of harmonist and finally of melodist with the arrival of the keyboards in the orchestra.

Traditional instrumentalists saw the arrival of performers and composers in search of new timbres; new ways of playing appeared. ‘Sul Ponticello’ for example: playing on the bridge of a string instrument to bring out a timbral colour, rich in harmonics.

The side blown flute sees an increased intensity of breathing, enriching its vocabulary, and also new fingerings allows the superposition of several unnatural harmonics These new multiple sounds are called ‘multiphonics’. The role of the flute also changes. Like percussion, the flute becomes a source of new timbres; Beyond its role as a melodist, it becomes a colourist and sometimes even percussive.

The frontier between instruments of ‘popular’ origin (accordion, percussion, saxophone) diminished and composers seized these new sounds for the tradition of classical music.

The emergence of musical electronics drives a desire to discover new sounds. Note the inventions of the early 20th century and the waves of Martenot (1918), of Thérémine (1919) of the Trautonium (1929) Then in the 50s the emergence of research studios dedicated to electronic music: Music Research Group (INA-GRM- 1958), the WDR in Cologne (1951) and later the Zentrum for Art and Media (1989) in Karlsruhe. The most famous and active studio in France in terms of musical electronics dedicated to contemporary music is the IRCAM, founded in 1969 under Pierre Boulez.

The formal canons are also forgotten The traditional musical forms (sonata, rondo, etc …) give way to the freedom of symmetry.

The arrangement of sound events in time becomes more precise and fine. In a binary or ternary division of the time, we now explore the 7, 9 and beyond. The appearance of the machine allows to standardize the scale of tempi, the pulsation (metronome) and to define more precisely the speed of interpretation and the breakdown of time.

The twentieth century saw the composers enhance their scenic location of pieces, bringing the performer to become an actor in relation to the sound emitted. The sound becomes revealing of an instrumental gesture, and the gesture comes to illustrate the emission of sounds.

In the 60’s and 70’s, composers (John Cage, Jōji Yuasa) integrated the performer into the compositional act By leaving him a place within the score, the composer makes the performer responsible for the content and sometimes even for the form of the work (John Cage: Piano Concerto, Brian Ferneyhough: Cassandra’s Dream Song for solo flute).

Lastly, about harmony: there is always a set of rules that allows the arrangement of frequencies, but the old rules have gone, and each composer is free to create his own. The old rules, developed by generations of composers over centuries (some in reaction to the previous generation) exist to give a familiar superposition of sounds, so that the listener finds a known and recognised language, which guides his ear pursuing a familiar path, discovering new subtleties.

The opportunity exists to explore unknown paths, to reveal new colours, new beats between sounds which were previously considered pollution, or errors.